Many of us will look back at the last six years of Bagni di Lucca as a golden period thanks to the local Fondazione Michel de Montaigne which, from 2008 onwards, has organised the most thought-provoking conferences covering the majority of the important personalities who have visited the comune through the centuries.

Founder and leading luminary of the Fondazione, which is sponsored by a variety of bodies, starting from the comune itself but also including banks and commercial associations, is Prof. Marcello Cherubini, whose own father wrote one of the completest guides to the area. An enthusiastic visionary, a hard task-master and an indefatigable fund-raiser, Marcello has helped forge a purer level of scholarship with regard to Bagni di Lucca’s history, evidenced in the panoply of publications for each conference, which will ever be held in the highest esteem.

I have been attending these conferences since they began and have been fascinated by the personalities and the works of so many of those who stayed in this unique part of the world.  Shelley, Ouida, Liszt, the Trollopes, Sir Richard Burton (the explorer that is), the Brownings, Heine, Montale and Puccini come to mind just at first thought! The list is truly awesome and it is to the credit of the Fondazione that they are no longer only a list of famous and not-so-famous names but breathing, living personalities brought into our present age with relevance and clarity through the participation of the many learned savants from all part of the world who have come here and presented their papers.

Here is the flyer for the latest (and last?) conference, which ends today:

Not only has the Fondazione concentrated on the personalities and the backgrounds of those who have visited Bagni di Lucca but it has also engaged in works of restoration and revaluation. One of the most noteworthy of these (and one about which I have already written about – vide http://longoio.wordpress.com/2013/06/29/some-corner-of-a-foreign-field/) is the refurbishment of selected funerary monuments in the Cimitero degli Inglesi (more accurately”dei protestanti” as there are many people buried here who were born outside the then British Empire) after years of neglect and decay when the whole place seemed destined itself to die under the ravaging mosses and undergrowth. 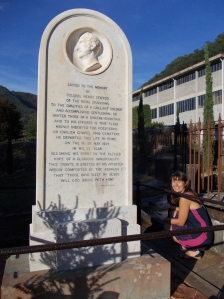 It was, therefore, both significant and poignant that a lovely open air concert was held yesterday afternoon in the Cimitero to celebrate the cleaning up of yet more tombs . For me it also seemed to elegise the end of an era of mind-opening conferences and cultural events at Bagni di Lucca.

The young players were favoured by serene weather and a capacity audience. After a graceful arrangement of part of Handel’s water music, the first movement of Beethoven’s String quartet op 18 no 4 followed. I could have quite happily heard the other three movements but time was at a premium and so we plunged into the last item: Puccini’s I Crisantemi, written for the death of the Duke Amedeo di Savoia in 1890 and one of the most poignant pieces of music I know. Indeed, the composer himself realised the emotions of this music and re-used much of it in the death scene of his first great success, “Manon Lescaut”.

The fact that the great composer’s grand-daughter, Simonetta, was present added greatly to the occasion and, watching her, I could see that she truly appreciated this tribute, not only to the dead of the Cimitero, not only to the end of an era of stimulating and often magnificent conferences but also to her own granddad who so loved a place which gave him his start in his career (playing the piano at evenings at Bagni’s Casinò) and to which he often returned (principally when he was composing” la Fanciulla”).

(Dr. Marcello Cherubini and Simonetta Puccini listening to “I Crisantemi”)

Here is a rather wind-shaken recording of the performance of this heart-rending threnody:

The weather and the music truly blessed us and I felt that I was present at a unique moment in the history of the wonderful comune of Bagni di Lucca.